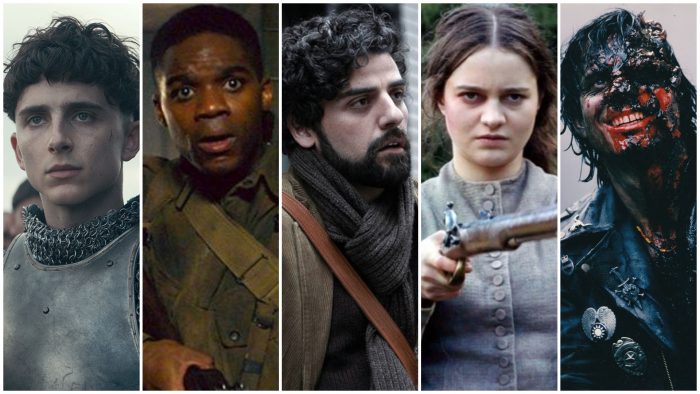 (Welcome to Now Stream This, a column dedicated to the best movies streaming on Netflix, Amazon, Hulu, and every other streaming service out there.)

Here we are again, standing in front of the vast wilderness of streaming. I’m sure as I’m typing this, at least five more streaming services are being created. All these options can make choices overwhelming, but that’s why I’m here. Let me make the choice for you. These are the best movies streaming right now. Let’s get streaming!

I’m sure everyone has their own particular “best Coen Brothers movie” pick, but for my money, it’s Inside Llewyn Davis. Awash in a cold, bleak wintry landscape captured by cinematographer Bruno Delbonnel, Inside Llewyn Davis is perhaps one of the bleakest movies the Coens ever made, even if it doesn’t seem like that on the surface. What makes the movie so particularly crushing is that its ultimate message – you can be a genuinely great artist, but even that might not be enough to get you recognized. Oscar Issac is incredible as Llewyn Davis, a folk singer trying to make it in the 1960s. He was once part of a duo that cut an album, but his singing partner died by suicide, and now Llewyn’s career is at a standstill. We can see from his various musical performances that he’s a genuinely good singer, and yet…it’s not enough. He gigs around, he auditions, he begs and pleads for work. And it doesn’t matter. When he plays a tune for a big-time booking agent, the man replies: “I don’t see a lot of money here.” It’s blunt and to the point. Sure, Llewyn is a great artist – but so what?

For fans of: A Serious Man, I’m Not There, Barton Fink, stray cats.

Chinatown is a tribute to noir – but it’s not one that leans heavily on tropes. If this film were made today it would probably be rife with a ton of winking visual references to movies past. But Chinatown stands on its own. It’s a homage that never feels like an homage. A throwback that feels fresh. It’s brimming with life, and drama, and mystery. Jack Nicholson is private eye Jake Gittes who is hired by a woman to investigate her husband. He thinks it’s a routine case of a wife trying to catch her spouse cheating – but there’s nothing routine about what follows. The further Jake digs, the more he gets embroiled in a story involving corruption and power. Nicholson is great here because his P.I. isn’t some stereotypical tough guy. He’s actually kind of a heel, ending up with a bandaged nose after a run-in with some thugs. And all the while, Robert Towne‘s crackling screenplay keeps the movie humming.

The King
Now Streaming on Netflix

A grimy, muddy, violent epic, The King attempts to blend both Shakespeare and history, resulting in a slick costume drama. Drawing on William Shakespeare’s Henry IV Part 1, Henry IV Part 2, and Henry V, The King is the story of a most unlikely monarch. Mild-mannered Hal (Timothée Chalamet) would rather just hang out all day with his drunk buddy Falstaff (Joel Edgerton). But when Hal’s cruel father – who also happens to be the King of England – dies, followed by the death of his older brother who was meant to be next in line to the throne, Hal has no choice but to wear the crown. He’s put to the test almost immediately when he’s all but forced into war with France.  Chalamet brings his smoldering good looks and intensity to the part, although his accent dips into Keanu Reeves in Dracula territory at times. And Edgerton makes for a great, melancholy Falstaff. But the real highlight of The King is Robert Pattinson, in a brief but memorable turn as The Dauphin of France. Pattinson gets to ham it up, adopting a silly accent and wearing a gloriously flowing wig. The King is worth watching for him alone.

For fans of: Henry V, Chimes At Midnight, lots and lots of dirt, mud, and blood.

Silly, gory, and a heck of a lot of fun, Tales From the Crypt Presents: Demon Knight is loaded with practical creature effects, an utterly ridiculous plot about the blood of Jesus, and Billy Zane having a grand old time as a demon. What’s not to like? A group of hapless mortals ends up trapped in a church-turned-hotel, where a demon has come calling, looking for a priceless artifact. What follows is a stand-off between humans and monsters, complete with gooey gore, disgusting demons, and Jada Pinkett kicking some ass. Critics trashed this when it arrived in 1995, but it’s since developed a much-deserved cult following. They don’t make ’em like this anymore.

For fans of: Prince of Darkness, Assault on Precinct 13, Billy Zane.

Brad Anderson‘s low-budget, slow-burn horror flick Session 9 is a great showcase on how to do so much with so little. Making great use of a real location – an abandoned mental hospital – Anderson was able to craft a movie overflowing with creepy, creeping dread. A team of asbestos removers, lead by the quiet Gordon (Peter Mullan), are brought in to help clear out the rotting  Danvers State Mental Hospital in Massachusetts. It’s a massive job, and would normally take a lot of time. But in order to score a big payday, Gordon promises that he and his men can get the work done in a week. But as the team gets down to business, disturbing things begin happening. Is the asylum haunted? Session 9 is so damn creepy because of the way it keeps us in the dark along with its characters. We can never quite be sure what’s real here, and it’s chilling.

For fans of: The Machinist, Shutter Island, David Caruso cursing.

Near Dark
Now Streaming on The Criterion Channel

Kathryn Bigelow‘s horror-Western is one of the coolest vampire films ever made. A gang of nomadic bloodsuckers –  Jenny Wright, Bill Paxton, Lance Henriksen, Joshua John Miller, and Jenette Goldstein – live together as a family, roaming across the landscape and murdering those who get in their way. One of the vamps, Mae, meets a young man named Caleb (Adrian Pasdar) and gives him a quick peck on the neck before running off. Since Caleb wasn’t killed, he ends up turning into a vampire himself. He takes up with the vampire family but is constantly at odds with them because he doesn’t want to murder people to get blood. Thus the stage is set for a stand-off. Everything here is slick, and cool, and exciting. The highlight is the late, great Bill Paxton as the most psychotic member of the group.

For fans of: John Carpenter’s Vampries, The Lost Boys, leather.

The Nightingale
Now Streaming on Hulu

The Nightingale is unrelentingly brutal – so much so that it might be almost impossible for some viewers to sit through it. Those who can, though, will find a stunning revenge drama. Set in Tasmania in the 1800s, The Nightingale follows Clare (Aisling Franciosi), an Irish convict who is brutalized by a group of British soldiers. When she suffers an unimaginable loss at their hands, Clare sets out for revenge, bringing an Aboriginal tracker named Billy (Baykali Ganambarr) along with her. The relationship between Clare and Billy is strained, to say the least – she’s constantly racist towards him. But very, very slowly, she comes to respect her traveling companion, all while seeking bloody vengeance.

For fans of: Revenge, The Babadook, misleading titles.

Michael Haneke‘s eerie Cache finds a wealthy French couple (Daniel Auteuil and Juliette Binoche) who keep being sent videotapes of themselves. Someone is filming them in secret, then leaving the tapes on their porch each morning. The invasion of privacy is creepy enough, but things get more uneasy as past secrets get dredged up. Cache remains almost maddeningly ambiguous, but that’s part of what makes it so haunting. Make sure you stay through the end credits…or you might miss something.

For fans of: Lost Highway, The White Ribbon, the glory days of VHS.

A gnarly World War II horror flick that’s bound to find an even bigger audience in years to come, Overlord drops some American soldiers behind enemy lines, and then forces them to deal with mutant zombie Nazis. It’s pulpy, and dumb, and pretty damn cool. Wyatt Russell, son of Kurt, is a hoot as the man in charge, but the real star here is all the effects work bringing horrific Nazi monster experiments to life. If you like silly monster movies that feel like they were ripped from the pages of an old comic book, Overlord is for you.

Every frame of Shadow is meticulously crafted to awe. Bathed in a monochrome color palette, Shadow is a somewhat complicated story about a lengthy plan in which a former general enlists an identical lookalike and his own wife to help him bring down a kingdom. The story is secondary to the visuals, which are sumptuous and gorgeous. Fights are staged in remarkably unique ways, and the world the characters inhabit somehow looks painted and fantastical while also being fully realized.

For fans of: Crouching Tiger Hidden Dragon, A Touch of Zen, umbrella fights.

The post Now Stream This: ‘Inside Llewyn Davis’, ‘Chinatown’, ‘The King’, ‘Demon Knight’, ‘Overlord’, ‘The Nightingale’, and More appeared first on /Film.