Login
Temtem Hands-On: How it Is (and Isn't) Like Pokemon
Casey DeFreitas

The first time I saw Temtem, I, like probably everyone else in the world, thought “Wow, this looks… exactly like Pokemon.” After playing the alpha for about six hours, I’m still pretty confident in describing it as about 85 percent similar to classic Pokemon. And before I go any further, no, this is not a review - this is just first impressions of Temtem, an MMORPG obviously inspired by Pokemon.

In Temtem, you start off as a young person whom you’ll customize with a plethora of options – options that will only increase as you play. It’s your Apprentice's Eve in which you (and your jerk rival, Max) celebrate with the town’s Temtem professor. Professor Konstantinos gives you your first Temtem, which is chosen from three starter Temtem: The Mental-type Houchic, the Crystal-type Crystle, or the Melee-type Smazee.

From there, it’s up to you to go to Accademia (yes, it's spelled like that) to learn more about Temtem (but you don’t actually attend classes), catch and tame Temtem, challenge eight Dojos, and possibly thwart an evil organization. The Temtem even show up as random encounters when wading through tall grass or exploring dark caves or ruins, and are caught by throwing an object - in this case a Temcard. Temtem are certain types, like Nature or Crystal, and can be two types at the same time. They can have up to four moves slotted at once, and their stats and type affect how they perform. Temtem can evolve, and sometimes their types change with the evolution. NPC Tamers will stop you to fight as soon as you cross their line of sight, and there are special buildings to go to in order to heal your Temtem and purchase Temtem-related items.

Yeah, it all sounds so eerily familiar. But there are some key differences, too, the most obvious being Temtem’s PC accessibility and its MMO-style, player populated world. While exploring, Temtem trailing behind you, you’ll see other tamers out and about as well. You can’t interact with them like an NPC, but you can go into a menu to do so. To facilitate the ease of cooperative play, it seems as though nearly all of Temtem’s battles are two on two - making it perfect for continuous co-op. Each Tamer, using separate accounts, bring their own Temtem into the battle, and this never feels unfair for the NPC opponents. On the contrary, playing strategically in a double battle is even more difficult with a partner unless constant communication is kept up, assuming both have Temtem around the same level.

Making Temtem double-battle focused is a neat solution to make co-op viable, and simultaneously, makes the entirety of Temtem more difficult, too - a welcome change for those clamoring for more challenge in the genre. It is too early for me to say how difficult Temtem really is, but double battles are inherently more complex than single battles. In addition, the classic treatment is kind of old-school in the inconvenient game-design sort of way, which forces you to backtrack through Temtem-infested dungeons if you can’t handle its back-to-back boss battles at the end. Some may love the extra challenge and punishment, others may lament the loss of time.

To be clear, I went into Temtem blind without researching the unique Temtem Type-chart, so I didn’t know things like how Melee-type Temtem were weak against Digital-type attacks, and it made me realize how much I rely on my ingrained Pokemon knowledge when playing those games, and how much more challenging they’d be if I didn’t know my opponent’s Pokemon was especially weak to Electric-type moves with weak Special Defense and high Attack. It’s difficult to play strategically when you know nothing about your opponent, but I'm glad I went in without studying to be able to gain the fresh experience of being a complete newb again.

There are a few more similarities and differences, like how Temtem's answer to Pokemon's Individual Values (SVs in Temtem) and Effort Values (TVs in Temtem) are present in different numerical capacities and can be seen whenever you want in a Temtem's summary. But, I wanted to specifically call out Temtem’s  stamina system, the only monster stat that truly differs from any of Pokemon’s. Instead of each move having a generous number of times it can be used, each Temtem has a pool of Stamina. Think of it like a mana bar. Each move uses a certain amount of points, and once the pool is used up, the Temtem will hurt itself if it tries to attack, and will be unable to act the next turn. Stamina is recovered between battles, but this system prevents Tamers from being able to rely on a single overpowered Temtem, and forces them to switch out to others or else be punished. 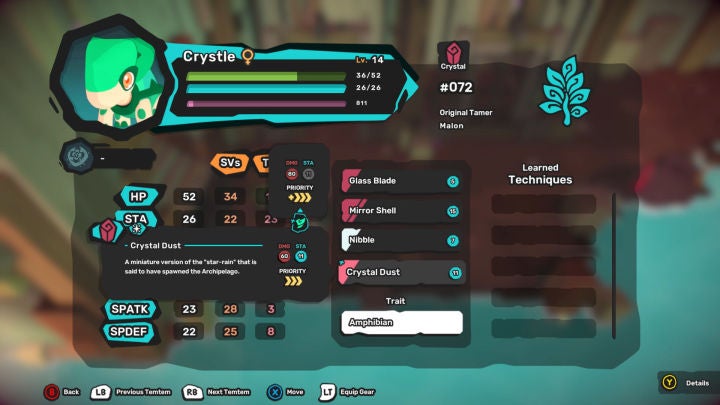 Another added spice to Temtem's combat is Synergy. Sometimes, a Temtem will have a move that gets a boost when its teammate on the field is a certain type. As you can see in the screenshot above, Crystle's Crystal Dust move gets a boost in both damage and priority when a friendly Nature-type Temtem is on the field with it. Traits--like Pokemon's Abilities--also encourage teammate combos. For example, Tateru can have a trait that won't wake up sleeping Temtem, so pairing it with a Temtem with Hypnosis is a cool combo.

For those looking for an MMO-style Pokemon, perhaps with some extra flavor in the form of challenge, a more thought out online-competitive system, and co-op, Temtem will probably scratch that itch, especially for those who prefer old-school Pokemon over more recent iterations’ quality-of-life improvements and time-saving updates. Temtem will enter Early Access on Steam on January 21, and will release on consoles sometime next year.

For more on Temtem, make sure to watch the first 17 Minutes of Temtem Alpha Gameplay above. [poilib element="accentDivider"] Casey DeFreitas is an Editor at IGN who loves monster hunting, slaying, and catching. Catch her on Twitter @ShinyCaseyD. [Disclosure: Humble Bundle (which is owned by Ziff Davis, the parent company of IGN) is either the publisher or financier of this game and may receive a commission or fee in connection with sales. Humble Bundle and IGN operate completely independently, and no special consideration is given to Humble Bundle-published or financed games for coverage or scoring.]http://feeds.ign.com/~r/ign/all/~3/vRKsMwJxT8w/temtem-hands-on-how-it-is-and-isnt-like-pokemon" target="_blank">Read More . . .