Login
New On Blu-ray and Digital: ‘Birds of Prey’, ‘War of the Worlds’, ‘The Mask of Zorro’, ‘Gretel and Hansel’, ‘Tigers Are Not Afraid’
Chris Evangelista 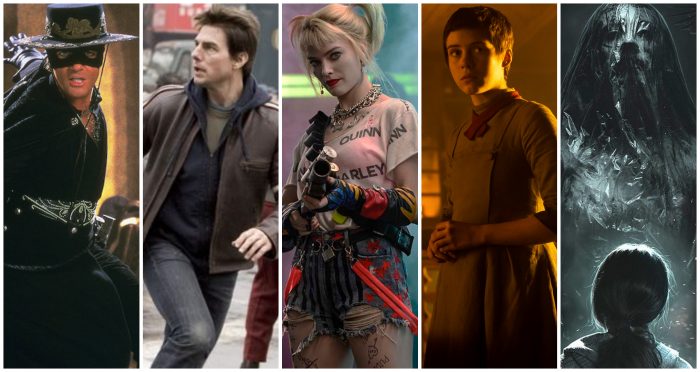 Hello again, friend of a friend. It’s time yet again to take a look at the latest Blu-ray and digital releases to keep you company in these uncertain, strange times. These are the new Blu-ray releases (and digital releases, too) you should check out this week.

Birds of Prey was not the box office bomb many made it out to be, but it wasn’t really a hit, either. Which is too bad, because it’s a lot of fun, and fits in nicely with other fun DC films Aquaman and Shazam. The difference here, though, is the hard-R rating. Some have argued that rating hurt the movie – and perhaps it did. There are some excessively brutal moments here, and on occasion, they clash with the goofy tone the film is going for. There are also some structural problems – the first half-hour of the movie keeps jumping back and forth in time to catch us up with stuff, and the film takes wayyyy too long to get the female leads all in the same room together. Once you get beyond that stuff, though, you have yourself a wild and funny flick about Harley Quinn (the very game Margot Robbie) splitting from the Joker and trying to make a name for herself. Then you have Jurnee Smollett-Bell as Black Canary, someone who works for criminals but wants to do the right thing; Rosie Perez as Renee Montoya, a no-nonsense cop who isn’t taken seriously; Ella Jay Basco as Cassandra Cain, a pick-pocket Harley takes under her wing; and Mary Elizabeth Winstead as Huntress, a vigilante who wants revenge. All of these characters run afoul of Black Mask, a mob boss played with over-the-top glee by Ewan McGregor. Director Cathy Yan cranks up the style, creating a visually distinct experience with some killer action scenes. It’s an overall successful film, even if that success wasn’t matched at the box office.

This fits nicely into the own category. It looks great on Blu-ray, and it’s a rewatchable flick that many are going to revisit a few years from now and realize they missed the boat. You’ve earned this – get yourself a copy. And then make a delicious breakfast sandwich.

I have an affinity for the 21st-century films of Mr. Steven Spielberg (have I mentioned I have a podcast about this very topic?), so perhaps I’m biased. But War of the Worlds is one of Spielberg’s best efforts of the 2000s – a bleak, scary blockbuster heavily inspired by 9/11. Sure, you could argue that Spielberg chickens out in the end (I don’t agree), but everything that comes before that final scene is tense and masterfully crafted. Self-absorbed jerk Tom Cruise is watching his estranged kids when aliens invade and start destroying everything in their path. Cruise packs up his kids and hits the road, not so much to save them, but to rather dump them with their mother so he doesn’t have to deal with them. Easier said than done. War of the Worlds is constantly churning along, with Spielberg pummeling us with one jaw-dropping set-piece after another. The entire movie is a reminder of why Spielberg is so acclaimed for what he does.

At long last, War of the Worlds has itself a 4K release, which makes this a purchase for sure. Spielberg in 4K? What’s not to love. There are no new special features here – they’re all ported over from the previous Blu-ray release – but that’s okay. You get a fine film beautifully remastered, and that’s enough.

Sexy, action-packed, and unafraid to have a great sense of humor, they just don’t make studio blockbusters like The Mask of Zorro these days. Sure, there are blockbusters that have some of those qualities, but name me a recent big studio franchise movie that has all of that – sex appeal, jokes, and awesome action. It just doesn’t happen anymore, and what a damn shame, because this movie is pure joy. The Mask of Zorro starts with the original Zorro, played by Anthony Hopkins, having his wife murdered. He’s then locked away to rot in prison while his mortal enemy (Stuart Wilson) raises his baby daughter as his own. Jump forward a few years and Hopkins busts out of jail and soon takes drunken thief Antonio Banderas under his wing. Banderas, of course, becomes the new Zorro. And he woos Hopkins’ daughter, now all grown up in the form of Catherine Zeta-Jones. From here the film launches into sword fights, horse comedy, and lots of scenes where Banderas and Zeta-Jones have so much sexual chemistry you’ll be pulling on your collar like a cartoon character. It’s hot, folks.

The Mask of Zorro feels like it’s experiencing something of a resurgence, and rightfully so. Not only has it caught people’s attention on Netflix, it now has this fancy new 4K Blu-ray release. And when it comes to the “own or rent” question, there’s really no reason to not own this. One of the best modern action-adventure films now on 4K? What are you waiting for?

Gretel and Hansel got dumped in January, which is usually the dumping ground for movies studios have no faith in (you know, back when movies still opened in theaters). And that’s a damn shame, because this dreamy, occult-laced fairytale retelling from Oz Perkins deserved better. There are some rough edges – there’s a narration that I’m 100% sure Perkins was forced to add by the studio, and at 87 minutes, the narrative feels too short. But Perkins loads the movie with haunting imagery that draws you into his dream-nightmare. Sophia Lillis is excellent as Gretel, with the film very much told from her point of view. Once Gretel and brother Hansel run afoul of the witch, the film subverts expectations by embracing a feminist empowerment spin that, had this film been more wide-seen, would no doubt cause angry man-babies to take to the internet shouting angrily, and record YouTube videos about how their childhoods were ruined.

This is a bit of a tough one. I want to say own here, because the movie deserves it. But I was also hoping for an “unrated” Blu-ray release – one that maybe freed-up the studio interference. But I guess that wasn’t in the cards. Oh well. Since this is likely to be the only version of the movie we ever get, I’ll say this should be a purchase.

Tigers Are Not Afraid

Tigers Are Not Afraid should appeal to fans of Guillermo del Toro. It very much has that del Toro “dark, brutal, unflinching fairy tale” style to it – there’s fantasy here, and a world view through a child’s eyes, but there’s also cruelty that you can’t escape from. Directed beautifully by Issa Lopez, Tigers Are Not Afraid follows orphaned children who are granted magic wishes. Sounds fun, right? It’s not. Because there are ghosts, drug cartels, and other hazards waiting around every corner. “I think that if you’re attempting to bring these things to the conversation of the social classes that make the decisions in Mexico — which is [the] middle class and upper class — they don’t want to watch movies about children suffering because of political corruption,” Lopez said. “So what you do is: You make a movie of a genre that makes it easier.”

Own this one. Sure, it’s streaming exclusively on Shudder, and if you already subscribe to that horror streaming service (as you should), you might not think this is worth picking up. But physical media will always look better than streaming. Plus you get plenty of special features, including a commentary from director Issa Lopez.

The post New On Blu-ray and Digital: ‘Birds of Prey’, ‘War of the Worlds’, ‘The Mask of Zorro’, ‘Gretel and Hansel’, ‘Tigers Are Not Afraid’ appeared first on /Film.