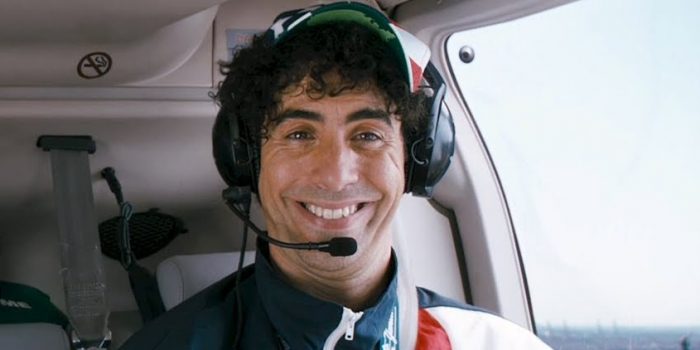 It looks like Sacha Baron Cohen is at it again. The notorious provocateur and satirist, who has built up a reputation for pranking real people while in disguise for his projects, has apparently staged his latest prank at an alt-right rally. Baron Cohen reportedly crashed a rally for the far-right militia group known as the Washington Three Percenters, leading the rally in a racist singalong before he nearly caused a riot and was chased out by the crowd.

TheÂ Washington state news outletÂ The OlympianÂ reports that Baron Cohen crashed the rally of the alt-right militia group the Washington Three Percenters while in disguise.

In a YouTube video taken from the rally, the comedian can be seen wearing overalls and a thick ginger beard while taking the stageÂ the “March for Our Rights 3” rally to lead the crowd of around 500 people in a racist singalong. The song urged listeners to attack liberals, CNN, the World Health Organization, andÂ included shocking lyrics like “Obama what we gotta do, inject him with the Wuhan flu,” and “chopping them up like the Saudis do.” The crowd, which held signs like “Stop tyranny, defend freedom” cheered Baron Cohen’s lyrics and anti-Semitic jabs (the “you-know-whos”) and anti-Asian taunts (“nuke ’em like we used to do”).

It’s a classic Baron Cohen stunt, and one that the comedian reportedly pulled off with a large, late anonymous donation from California, according to an organizer for the event. Cohen also had his own security on hand to prevent anyone from pulling the plug while he was onstage, and to ensure his safety if attendees caught on.

And apparently, the crowd did get wise to the act, but not before they were soundly humiliated with the widely-recorded singalong and a separate instance where Baron Cohen snuck in under aÂ different disguise. Baron Cohen was reportedly chased out of the rally, but left safely in an ambulance waiting to evacuate him.

â€œDisguised as a PAC out of Southern California, paid for the stage setup and musical entertainment. Came on stage disguised as the lead singer of the last band, singing a bunch of racist, hateful, disgusting shit. His security blocked event organizers from getting him off the stage or pulling power from the generator. After the crowd realized what he was saying, and turned on him, his security then rushed the stage and evacuated them to a waiting private ambulance that was contracted to be their escape transport. It was a set up, and smack in the face of the great people who put on this event.â€

It’s unclear if Baron Cohen’s latest prank is part of hisÂ Who Is America? program, which aired its first season on Showtime in 2018, or of this is part of a new feature film for the comedian. Whatever the case, it’s always hilarious whenever Baron Cohen pops up out of nowhere to deservedly troll the alt-right.