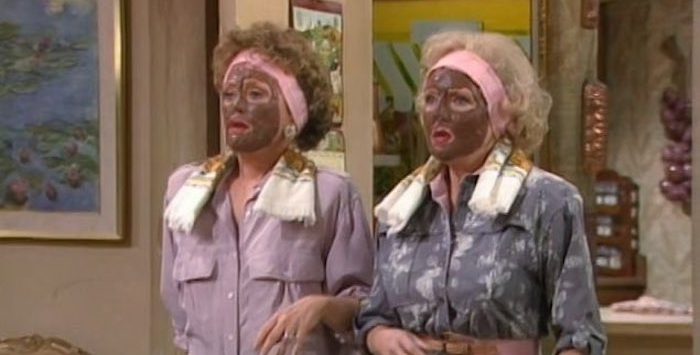 Hulu has removed an episode of The Golden Girls over blackface concerns amid Hollywood’s grappling with troubling portrayals of race in film and TV. But as streamers have taken a machete to episodes featuring blackface like 30 Rock, Scrubs, and the Netflix comedy sketch series With Bob and David, and late-night hosts like Jimmy Fallon and Jimmy Kimmel have publicly apologized for past uses of blackface, criticism has started to emerge that Hollywood is “overcorrecting” without actually addressing the real problems of racism in the entertainment industry.

The Hollywood Reporter revealed that Hulu had removed the Golden Girls episode, “Mixed Feelings,” which originally aired on NBC in 1988, over a scene of unintentional blackface played for comedic effect. The scene in question involves Rose (Betty White) and Blanche (Rue McClanahan) trying out a mud face mask when they meet the Black family of Dorothy’s (Beatrice Author) new daughter-in-law, Lorraine (Rosalind Cash), an older Black woman that Dorothy’s son Michael (Scott Jacoby) is planning to marry.

THR describes of the scene:

Dororthy is concerned over the age difference while Lorraine’s family disapproves of their daughter marrying a white man, and thus the two families attempt to end the marriage. In the episode, Lorraine’s family finds Rose (Betty White) and Blanche (Rue McClanahan) trying a new mud facial treatment, and as they greet their family, Rose states, “This is mud on our faces, we’re not really Black.”

However, soon after Hulu removed the episode, critics called the streamer’s decision an “overcorrection,” with many arguing that characters weren’t actually wearing blackface. Writer Roxane Gay explained, “Removing this episode is weird, counterproductive and stupid. It diminishes the effort to actually end racism.” Podcaster and author Erica Williams Simon added, ” I would just hate for the seriousness of this moment and movement to get lost in symbolic (and sometimes silly) overcorrections.”

The removal of this Golden Girls episode comes on the heels of the similarly polarizing decision to remove an episode of Community that can’t really be categorized as blackface (dialogue in the scene clearly states that the character is dressed as a Dungeons & Dragons character, in a joke that could be construed as a jab at racial coding in the roleplaying game). With streamers taking the axe to episodes that could even be mistaken to be blackface, as seemingly innocent as they are, it points to a troubling trend that Hollywood is only playing defense on potential controversies and not properly addressing systemic racism in the industry. It’s disappointing, to be honest, and doesn’t actually add to the ongoing conversations about race and diversity.

The post Hulu Takes Down an Episode of ‘Golden Girls’ Over Blackface Concerns appeared first on /Film.