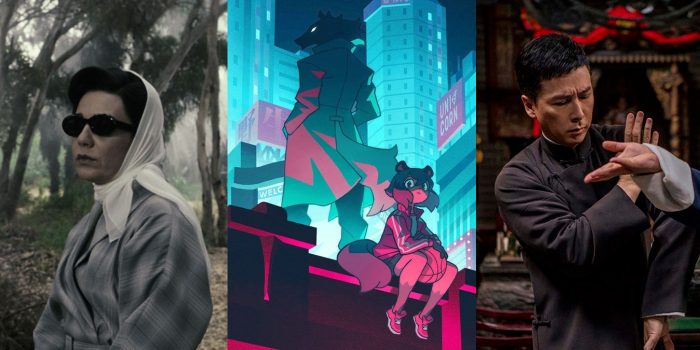 Somehow, we’re nearing the tail end of summer and the pandemic situation doesn’t seem like it will change all that much. But at the very least, streaming services won’t run out of new content anytime soon. And while new entertainment may start to dry up in the states, we can always import a few international titles to keep us going. In this week’s Pop Culture Imports, the best foreign movies and TV shows include the finale to Donnie Yen’s beloved Ip Man series, an engrossing Iranian drama with a heavy dose of magical realism, a new rom-com series for foodies, and more.

Fire up those subtitles and let’s get streaming.

Released on the Criterion Channel as part of a collection of films scored by Ryuichi Sakamoto, Women Without Men is an elegant exploration of gender issues in the Islamic world that actually originated as a video installation by artist Shirin Neshat. Neshat would turn Women Without Men into a feature film in her transfixing debut loosely adapted from a magical realist novel by Shahrnush Parsipur. As such, Women Without Men, which is set against the politically turbulent backdrop of 1953 Iran — right on the cusp of the CIA-backed coup that returned the Shah of Iran to power — is a little disconnected in its weaving together of the stories of four women all suffering under the oppressive rule of men. One is a wealthy wife of a general who keeps picking up new wives, one an aspiring revolutionary, another is a disillusioned prostitute, and the last is a sheltered young woman recovering from an assault. The film wanders pensively through their separate lives in delicate little vignettes that have a sprinkle of surrealism to them, culminating in all of them at one point taking shelter in the wealthy wife’s orchard, an enchanting isolated mansion that becomes a safe haven for the women, even as the country around them crumbles. Neshat’s background as a visual artist makes Women Without Men a visually arresting experience that imbues a familiar revolutionary storyline with a kind of otherworldly magic.

Watch This If You Like: Persepolis, Love in the Time of Cholera, your magical realism with a dose of political turmoil.

The fourth and final film in the Ip Man franchise goes through the motions of every Ip Man movie: Donnie Yen‘s Wing Chun grandmaster is stirred out of his comfortable home life by some looming foreign threat, he resists going up against said threat out of a sense of duty to family, and he finally relinquishes in a thrilling final battle that represents the superior power of China. Toss in a few overacting Western actors and fight sequences that destroy the interior of a Chinese home, and you’re set. Ip Man 4: The Finale picks up in 1964, following the death of his wife, as Ip Man discovers that has throat cancer due to smoking. Looking to set up his son with a good life after he’s gone, Ip travels to San Francisco to look for a good school, and gets caught up in a conflict between the Chinatown martial arts community and the U.S. Marines. Scott Adkins chews up the scenery as the Western villain of the hour, a racist Marine staff sergeant who wants to prove that karate is superior to Chinese kung fu, but the movie is really a showcase for Danny Chan as Bruce Lee, whose performance as Ip’s famous pupil is surprisingly good and never feels too costume. Ip Man 4: The Finale may not diverge too much from the formula that made the franchise such a hit, but it’s a fitting, and rather melancholic, end to the 12-year film series which began all the way back in 2008 with Ip Man.

Watch This If You Like: The Ip Man series, of course.

It’s a great time for furries with a Netflix subscription. But while BNA follows soon after Netflix’s hit coming-of-age anime Beastars and bears some similarities with its anthropomorphic animal characters, this bonkers urban fantasy anime couldn’t be more different. The series follows Michiru Kagemori, a young teenage girl who suddenly begins to transform into a tanuki (raccoon) beastman. In a world where the beastmen, or humanoid animals, are persecuted by humans, Michiru is forced to flee to Anima City, the lone sanctuary for beastmen to live in peace, where she meets a wolf vigilante named Shirou Ogami. Michiru gets caught up in a human plot against the city and strikes up a wary alliance with Shirou, who begins to train her to control her new powers. Featuring eye-popping graphic art-inspired animation from Studio Trigger (the experimental anime studio behind Kill la Kill and Promare), BNA delivers the kind of wacky concept you can only get in anime.

Watch This If You Like: Carnival Row, Zootopia, the Blade Runner aesthetic but with fun and furries.

Foodie Love, created by Isabel Coixet, premiered on HBO Spain in December, but the eight-episode series wouldn’t premiere on HBO’s various streaming services, including HBO Max, until July 13. Just in time for it to debut in the midst of Netflix’s reality dating show dominance, and offer a charming, scripted alternative. Foodie Love is a little more interesting than its premise — two thirtysomethings meet through a foodie dating app — but it’s also very eager to show how interesting it can be (to the point that it verges on twee). The Spanish-language series jumps between fourth-wall breaking monologues from its two leads (an incredibly charming Laia Costa, and a slightly less charming Guillermo Pfenin) and their awkward-to-flirty exchanges, which is interrupted by cartoony thought bubbles and flashbacks to exes. It’s all incredibly quirky, but Costa and Pfenin’s chemistry, and the frequent odes about food, prevents it from being totally insufferable.

Watch This If You Like: Eat Pray Love, Chocolat, food Instagrams.

Your Lie in April – HBO Max

A lighthearted, near slapstick, introduction belies a bittersweet core in this beautifully animated romance anime. Your Lie in April debuted on HBO Max as part of the streamer’s deal with Crunchyroll, but the property has been around for a while — first adapted into an anime from Naoshi Arakawa’s manga series in 2014, and even getting a live-action feature film adaptation in 2016. The anime follows former piano prodigy Kousei Arima, two years after his mother died and he lost the ability to play. He lives a “colorless life,” he admits, until he meets a beautiful and free-spirited violinist named Kaori Miyazono, who helps him embrace his love of music again. Your Lie in April is not breaking any ground as a lighthearted romance-turned-tearjerker, but it’s a beloved series that deserves your attention as you sift through the impressive collection of anime on HBO Max.

Watch This If You Like: Me Before You, A Walk to Remember, basically any Nicholas Sparks tearjerker.