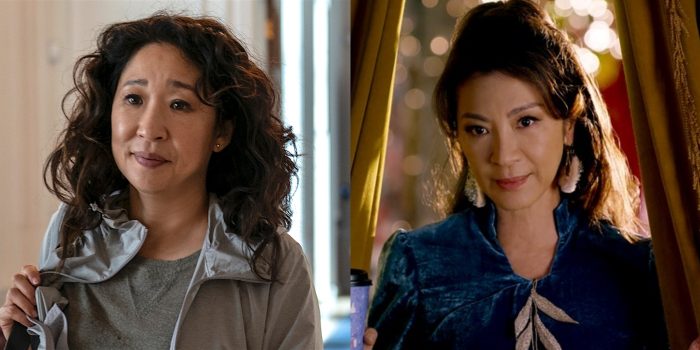 Paramount Animation’s adaptation of The Tiger’s Apprentice has struck gold with its cast. Golden Globe winner Sandra Oh (Killing Eve) and international superstar Michelle Yeoh are lending their voices to The Tiger’s Apprentice animated film, an adaptation of the best-selling children’s book. The casting reunites Yeoh with her Crazy Rich Asians and Last Christmas co-star Henry Golding, who leads the animated movie.

Fresh off an Emmy nomination for her lead role in Killing Eve, Sandra Oh is joining the star-studded The Tiger’s Apprentice cast, alongside Crazy Rich Asians star Michelle Yeoh, according to The Hollywood Reporter. The pair join a cast that also features Brandon Soo Hoo (From Dusk Till Dawn: The Series), Bowen Yang (Saturday Night Live), Sherry Cola (Good Trouble, Claws), Kheng Hua Tan (Magnum P.I.), and of course, Henry Golding, who has been attached to this project from the beginning.

The Tiger’s Apprentice is an adaptation of the best-selling children’s book by Lawrence Yep published by HarperCollins in 2003, which follows “a boy in San Francisco who meets a shape-shifting talking tiger named Mr. Hu and under his tutelage and protection is introduced into a magical world that includes an ancient phoenix, a dragon and a clan of evil-doers,” per THR.

Oh is set to play Mistral, a friend of the tiger (voiced by Golding), who is an exiled dragon living in San Francisco. Yeoh’s character has not been revealed.

The film will be the feature directorial debut of Pixar animator Carlos Baena, who has worked on films like Wall-E and Toy Story 3. Davig Magee (Life of Pi), Harry Cripps and Kyle Jarrow penned the script, which adapts the first book of the trilogy, which includes Tiger’s Blood and Tiger Magic.

It’s exciting that Hollywood is starting to double down on Asian representation in its animated films (even if a few of them are transparent attempts to appeal to the Chinese box office), with films like Abominable and Disney’s upcoming Raya and the Last Dragon. But while The Tiger’s Apprentice is steeped in Chinese mythology, particularly the mythology of the Chinese Zodiac, the children’s books are firmly rooted in the Chinese-American experience, with its setting in modern-day San Francisco. While Paramount Animation hasn’t yet had a major critical hit (the biggest movie to this fledgling animated studio’s name is currently Sherlock Gnomes), it seems like it’s investing in good creative and voice talent for The Tiger’s Apprentice, especially with a former Pixar animator on board.

The Tiger’s Apprentice has been set for a February 10, 2023 release date.