Joe Manganiello is built like a comic book character. He’s played one before, popping up very briefly as Deathstroke in the post-credits scene of Justice League – a tease which, through no fault of his, will likely never pay off. Now he’s toying with the superhero genre again in Archenemy, a new film in which he plays an alcoholic and homeless character who may or may not be a hero from another dimension.

Oh yeah, and his character’s name is “Max Fist.” Amazing.

Check out the trailer for the film below, which reminds me of what might happen if Hancock was mixed with Taxi Driver.

This is the newest movie from writer/director Adam Egypt Mortimer, who previously directed Some Kind of Hate and last year’s Daniel Isn’t Real, another movie that plays with perception and reality. In a difficult independent film landscape which places high value on genre films and superhero stories, a movie with a premise like this one seems like a smart and creative way to get noticed.

The chief question that seems to be posed here is whether or not Max Fist (again, just an A+ character name) is telling the truth, or if he’s just a lonely, delusional, sad alcoholic. I suspect the answer to that question may not ultimately matter as much as this trailer wants us to think – Mortimer has a chance to hook us with this creative premise and explore deeper questions once we’ve decided to take the ride with him, so while this surface-level superhero story is admittedly cool, I’m also hoping there’s a little more to chew on.

In addition to Manganiello, Archenemy stars Glenn Howerton (It’s Always Sunny in Philadelphia) and Paul Scheer (The League), who both seem to be going absolutely bananas in this in the best way, along with Skylan Brooks (Empire, Castle Rock), Zolee Griggs (Wu-Tang: An American Saga), and Amy Seimetz (Pet Sematary). Check out the comic book inspired poster here: 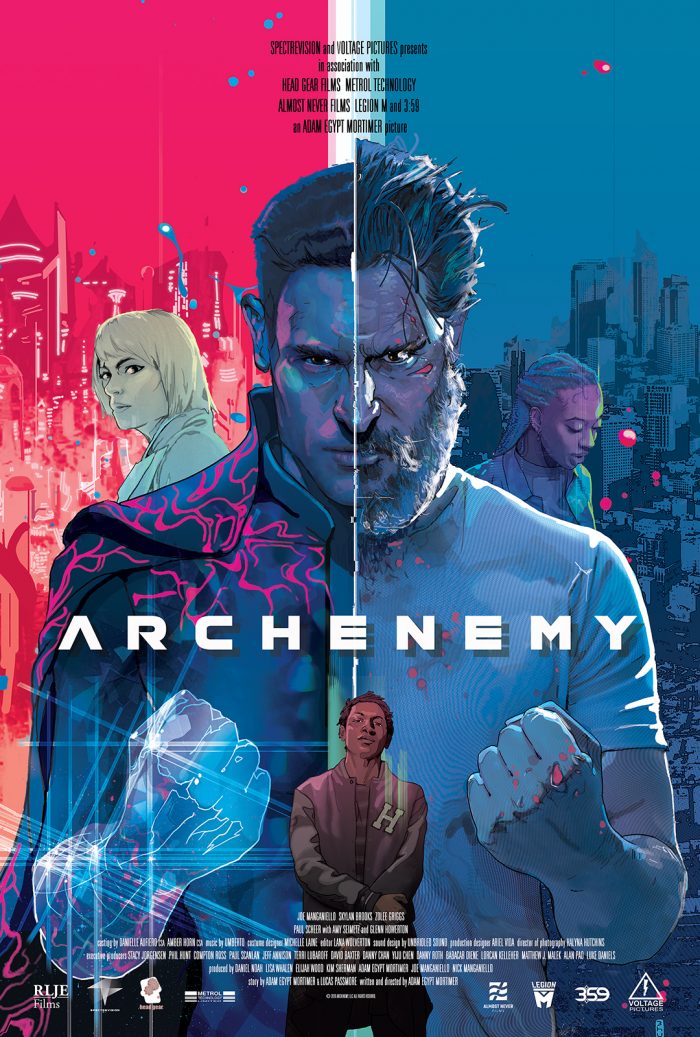 Max Fist (Manganiello) claims to be a hero from another dimension who fell through time and space to Earth, where he has no powers. No one believes his stories except for a local teen named Hamster. Together, they take to the streets to wipe out the local drug syndicate and its vicious crime boss known as The Manager.

Archenemy will be available in theaters and accessible via On Demand platforms on December 11, 2020.